skip to main | skip to sidebar

That's What I Said!

Today was my turn in the family share plan of a recent 48-hour sore-throat virus, and I was desperate for something to drink. I spotted a Taco Bell up ahead and, not wanting Oldest Son (5) or Youngest Son (3) to start begging for food, said to Husby, "Can we please stop at TB for a drink?"

For the record, children can keep this up for much longer than parents think they can. And also, laughing while drinking Pepsi isn't a good idea when one has a sore throat.
Posted by Sheyna at Tuesday, May 30, 2006 7 comments: Links to this post 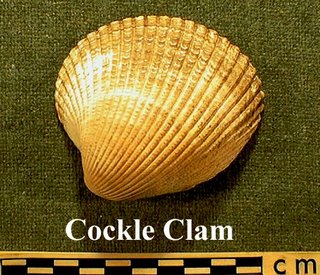 As the PT will be turning 5 soon and has been riding her bike more, I took the opportunity to caution her about talking to strangers.

"Remember, we don't talk to strangers. If a stranger comes up to you, and offers you candy or a toy and wants you to go with them, you say, 'No!' "

"Uhhh...well that would still be talking."
Posted by PsychoToddler at Sunday, May 28, 2006 1 comment: Links to this post

I have some neighbors who speak Spanish at home. The 5-year-old didn't learn English until he went to kindergarten, which seems like a hardship, but is actually very good because he'll be fluently bilingual without having to study for years. Anyway, sometimes his 2-year-old brother is whining and I can't figure out what's wrong. So I ask, "Jose, what's wrong with Pedro?" "I don't know." "Well, ask him what's wrong." "Pedro, what's wrong?" Um, try Spanish! Silly kid. And whenever I ask him how to say something, he grins and claims not to know.
Posted by Kiwi the Geek at Sunday, May 28, 2006 No comments: Links to this post

My youngest child has some trouble with the "s" sound, so a few sessions of speech therapy were in order this school year. And of course, homework was involved, and I was usually the homework buddy.

He said: "This is the biggest star...so that Hashem can hug it!"

Sari's nursery was visited by mice today. In a cage, thankfully. It was part of a lovely program they're having where every week Adina brings another animal to talk about. Last week was the guinea pig. So Sari was telling me all about today's visit. An excerpt:

Sari: We had a mouse today in school. Adina said it don't bite so don't worry.

Sari: They were white.

Me: They? Was there more than one mouse?

Sari (patiently demonstrating the math concept with her fingers, and simultaneously attempting to explain the irregular plural form of mouse): No, no. You say two mice, one mouse - so that's three mouses!

Update: That weekend, I read the newsletter sent home to the parents that describes the weeks events. Turns out there were only two mice! She thought there were three because....two mice, one mouse!
Posted by Ayelet at Wednesday, May 17, 2006 3 comments: Links to this post

Observation while riding her bike around the block:

The PT: Someone needs to lawn that mow.
Posted by PsychoToddler at Monday, May 15, 2006 2 comments: Links to this post

This is from my 4 yr old cuddly bear, Noah for Mother's Day. 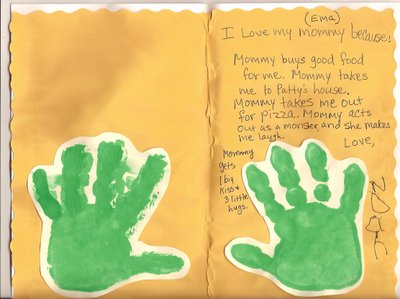 Lately Heard 'Round Our House

Child # 3, a six-year-old boy, has lately been trying out his authoritative voice on me, declaring:


Okay, youngest child of mine. I'll be sure to remember that when you come cryin' to tell me that Aba didn't let you do/have something that you wanted. Even "I'm nice to you. You have to be nice to me!" doesn't always work on Abbas!
Posted by torontopearl at Monday, May 15, 2006 1 comment: Links to this post

Me: Huh? What does that mean?

Mordechai: Or maybe a sweet square.

Mordechai: Well, why should we always be "sweetheart"?
Posted by Ayelet at Thursday, May 11, 2006 2 comments: Links to this post

Straight from the heart

Sari (leaning over and lowering her voice to confide): My morah told me to say that.
Posted by Ayelet at Thursday, May 11, 2006 No comments: Links to this post

My Daughter, the Doctor

The PT: It hurts when I move it like this.

The PT: Maybe I should stop moving it like this.
Posted by PsychoToddler at Monday, May 08, 2006 2 comments: Links to this post

Me: We only have one floor.

Rivka: But me and Chana want an upstairs! Or a bunk bed.

When we had a young couple at my house the other day, Kaiser came in and sat on my lap. The young lady asked, "How old are you?" and Kaiser said, "Five" He is three.
Posted by Bonvallet at Wednesday, May 03, 2006 3 comments: Links to this post

Ok, so as some of you know my daughter has created her own science website (time for a shameless plug - http://sciencewonders4kids.blogspot.com/). Well, recently she asked me a rather, ahem, personal question about the female body, and though I gave her a generic answer, I made the mistake of then following it with, "but I really don't know, that's a great question."

BIG MISTAKE. Why, may you ask? Because now she wants to post the question on her science blog. She was so cute when justifying her reason for wanting to post it on her website. "See, ____ is part of the body, and the body is science and we don't know the answer, but maybe someone does, and so like, I think I should ask the question on my blog."

Well, it really is a very personal question, but let's just say it has to do with, Ummm, a female body part, and something that almost all mammals have in common.

Man, it never fails to surprise me the observations they make and the questions they ask.
Posted by ... Is the Window to Our Soul at Tuesday, May 02, 2006 5 comments: Links to this post